Blaber returned a first-round 76 on Wednesday in difficult conditions and yesterday added an excellent 1 under par 71 to register a 10 shot victory over runner up Gary Stone (Bude & N Cornwall). Blaber withstood the additional pressure playing over a home course brings and delivered a calm measured performance from start to finish.

Wednesday had seen brutal conditions for the 39 competitors, with rain throughout and strengthening winds. The 4 over 76 Blaber registered was the best first-round score by two shots from 2019 Champion Charlie Phillips (Newquay). Blaber's round contained 10 pars and two birdies and this round was the foundation of what followed on day two. At the end of Day 1 Blaber led by two from Phillips and by 3 from Alan Poole (St Mellion) on 79.

Day 2 was not the best of golfing days either though. Coastal fog and low cloud rolled in and out for a large part of the day causing a delayed start and one suspension of play for the earliest of the medal competitors. By the time the leaders set foot on the course at just after 3 pm conditions had improved and thereafter play was uninterrupted.

In a great display, 55-year-old Blaber did not register worse than a bogey on his card at any point in the two rounds and the second contained 11 pars and four birdies as he went out in one over and returned in 2 under for the 71.

Blaber was a happy man as he collected the Seniors Championship trophy in this his first foray into county seniors golf. "Obviously I am really pleased to have won. I played well overall and managed to do it over my home course. Playing at home might be an advantage but it brings an added pressure. It wasn't easy on day one but I hung in there well and today was just perfect for me. I did what I had to do so yes really pleased.'

Clotworthy congratulated Blaber on an exceptional performance and thanked Carlyon Bay for their excellent hospitality and for affording considerable time to the CGU over the past week.

Runner up Stone returned rounds of 81 and 76 for a 157 total to finish one ahead of third-placed former county seniors champion David Kneebone (Truro) on 158. Fourth spot went to Richard Simmons (Tehidy Park) one shot further back on 159. Phillips also finished on 159.

Make the most of your weekends 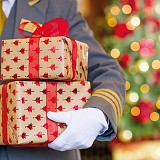 Until 22nd December | Room & Breakfast From £70 Per Person Per Night | Join us for a luxury break with complimentary festive extras from gin & vodka tasting courtesy of Colwith Farm & Distillery, to cream teas, prosecco and much more. Click Here to find out more.