Book Direct For The Best Price Guaranteed. Have a look at some of the great reasons to book direct! 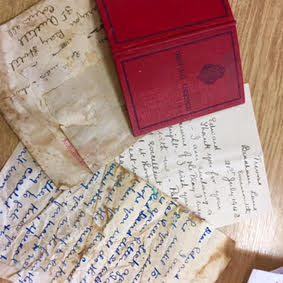 Like many large buildings away from big cities and industrial centres that were used to accommodate evacuees during the war years, The Carlyon Bay Hotel was home to 400 school boys during the Second World War. In 1940 boys from Kings College and St Edmonds College in Kent were evacuated en masse to the safety of Cornwall to continue their education far from the bombs and uncertainty of wartime Kent.

Masters arranged to set up the hotel to run along normal school principles including common rooms, classes in public rooms and garages and all the arrangements necessary to see to the needs of the 400 teenage boys. A wonder of logistics and organisation.

Fast forward to winter 2013 sees Carlyon Bay embarking on our continuing bedroom refurbishment. During such a refurbishment everything is upgraded to modern standards so rewiring of electrics and plumbing is replaced. To enable this work to go ahead walls are chased out and floorboards pulled up. In the midst of all this work tucked between the joists was found a pile of papers and letters. These documents turned out to be a number of letters, drawings, and some hand written Morse Code. Our maintenance people stopped work to rescue the documents and brought them down to be included in our history file.

April 12th 2015 the Kings School Old Boys Association paid their second visit to coincide with their 70th anniversary of leaving the hotel. Their first visit on the 50th anniversary was when they unveiled a plaque marking their wartime home at the hotel.

During the visit we were able to discuss many stories and anecdotes with the ‘old boys’ and on one occasion were able to tell the story of our long lost letters with the principal who was understandably very interested. He said he would check the school records to try to find out any information and wrote to say that there had been a boy called King at the school at that time and that he would try to contact him or his family.

On Wednesday 5th April 2017 we received a phone call from a Mr King who explained that he had had a message from the school stating that some letters had been found and asking if he might come to view them. He duly came on Monday 10th April accompanied by his son, his first time since coming to the hotel in 1995 with his wife when Channel Four made a television program called ‘Through the eyes of a child’. This documentary was filmed at the hotel in 1995 and showed pictures, film footage and interviews with old boys who shared their experiences of evacuated children during the war years. Mr King told us that he and his wife were on the video and it also included a still picture of him at the school taken whilst General Montgomery (a King’s old boy) visited the school. General Montgomery was inspecting the boys following an address in the ‘Chapel’ (the hotel old large garage that was used for church & assemblies instead of the cathedral at home). Mr King explained that he had rushed to take his place and can be seen hiding his prayer book behind his back.

When presented with our findings from under the floor he instantly recognised his mother’s hand writing on 2 of the letters that she had written to him at the time. We were suddenly very aware of the emotional strain put on families this forced absence caused and how welcoming and precious a letter would have been to a child wrenched from the family home in such uncertain times. A far cry from our modern communication systems. Mr King explained that the driving licence also found with the papers was that belonging to his brother who at the time was serving in the Royal Navy on a destroyer in the Indian Ocean.

Mr King also recognised the name of another boy on one of the letters and explained that there were usually 4 boys to a room so not a great deal of privacy which might explain why theor treasures could have be hidden under the carpet and possibly simply brushed under the boards when the hotel was reopened.

It would appear that the war had not dampened the boys sprits however, boys will it appears, and always have been, boys. One of Mr Kings strongest memories was when they awoke one morning to find some of the senior boys had parked a masters Austin 8 car in the foyer. He also recalled a sadder moment when the boys gathered one evening in the dining room and by looking east they could see Plymouth burning from the bombing.

Mr King was with us for a couple of hours and toured the building remembering things as they were and commented on all the improvements and refurbishments that have taken place over the years to make such a first class hotel. We were delighted that Mr King agreed to pose for a photograph with the letters next to the plaque that the ‘old boys’ placed here in 1995. We all look forward to Mr King’s next visit to the hotel.

The best family Summer in Cornwall! 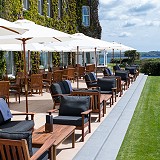 Enjoy a last-minute getaway by the sea here in Cornwall, with the lowest rates available and exclusive benefits. Award-winning dining, complimentary golf, outdoor swimming pool, and indulgent spa all combine for a luxury holiday. Click here to discover your next break or click Book Now.