Back to The Hotel

Discover the fascinating history of this unique hotel

Built in 1925, this was the first hotel at Carlyon Bay and was originally called the St Austell Bay Hotel. The hotel quickly became a fashionable choice with movie stars and celebrities alike and was frequented by a famous Royal visitor, Edward (Prince of Wales), and his future wife, Mrs Wallis Simpson.

The building suffered a devastating fire in 1931. Locals who rushed to the scene to help were met with the sight of furniture being frantically thrown from the windows to save it from the flames.

During the war years, two boys’ schools from Canterbury - The Kings’ School and St Edmund’s, were evacuated to the hotel to escape the Blitz. In March 1944, General Montgomery came to the hotel to inspect the schools’ cadet force. (In April 2015, a special 70th Anniversary Reunion was hosted at the hotel for the surviving evacuees and their partners.)

There was also considerable excitement when Sir Winston Churchill stayed at the hotel with his wife Clementine in 1953.

In 1982, the Carlyon Bay Hotel became part of the Brend Group and since then, the Brend family have continually invested in improving the facilities at both the hotel and its fine championship golf course. This has led to Carlyon Bay Hotel winning the Conde Nast Johannsen's Award for Excellence in 2013, as well as more recently obtaining the Gold Award at the South West Tourism Awards 2020/21 in the Large Hotel of the Year category. The Brend Group itself was named Hotel Group of the Year for 2015-2016 in the AA Hospitality Awards.

Book before the 31st of January 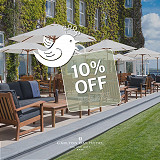