We are delighted to have once again been nominated in the South West Tourism Awards in the Large Hotel of the Year category. After our success in the same category in last year's awards, we wish all our fellow nominees well.

After yet another strange year, we were delighted to retain Gold at the Cornwall Tourism Awards earlier this year and after our Gold award in last year's virtual awards, this year it will be nice to attend the awards in person on the 7th April.

This nomination shows the investment of the Brend family as well as the exceptional professionalism and friendliness that our team have shown over the past 12 months. 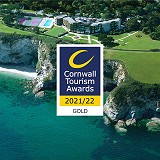 Success in the Cornwall Tourism Awards

See our success in the Cornwall Tourism Awards 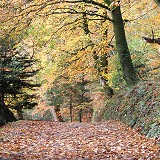 Room & Breakfast breaks from £135 per person per night | Getaway to the Cornish coast this autumn and witness as landscapes get a new lease of life under the hue of autumn from the warmth of The Carylon Bay Hotel. Enjoy award-winning dining, complimentary golf and an indulgent spa. Click Here to discover your next break or click Book Now.